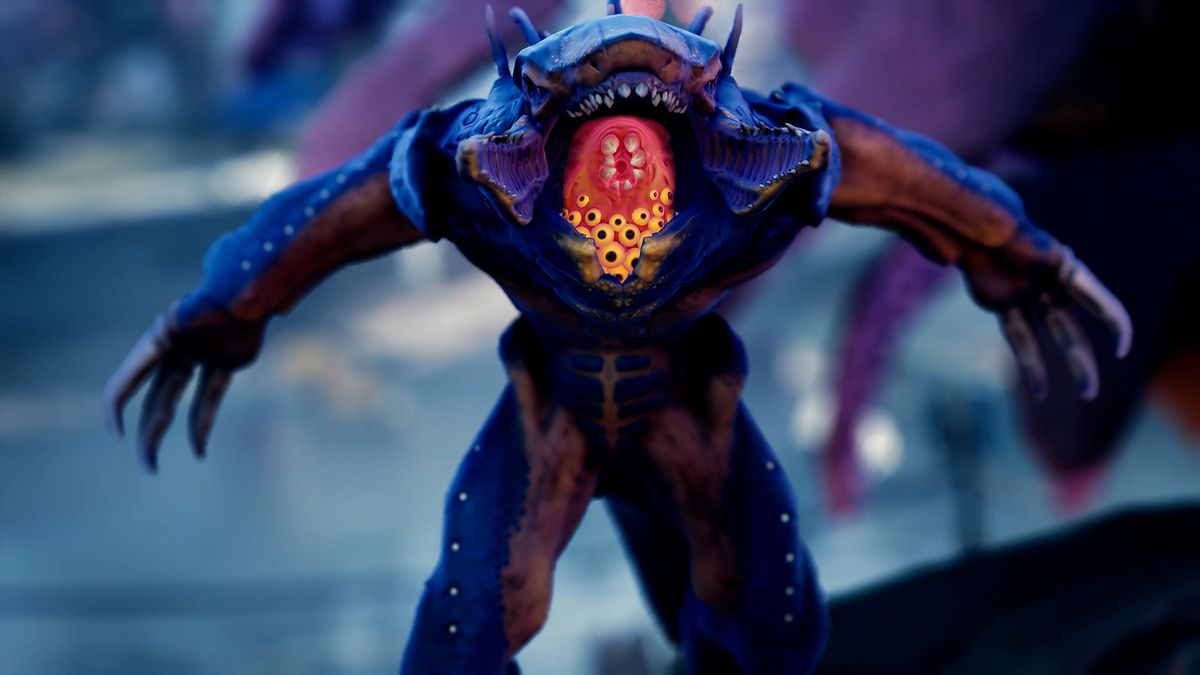 A sub-genre has been brewing away amid the tide of battle royales and hero shooters. The obtuse shorthand is PvPvE, which essentially means multiple players having to occupy and fight through a shared space full of baddies in the pursuit of competing goals. There aren’t a ton of these kinds of games but they capture something of the potential for memorable stories that you’d get out of a DayZ, with the tighter structure of a competitive match. At their best they are an endless story generator, capitalizing on the scope of possible interactions while applying pressure to have players make increasingly dangerous decisions.

The Cycle: Frontier enters into this fray as a free-to-play title, arguably making it more accessible than many of its peers. You’re a prospector, a gun for hire in a sci-fi setting with a Western twang, dropped from an orbital station in little pods onto a ravaged world to scavenge resources and supplies left behind by the settlers who abandoned the dangerous world due to its terrible storms. As set-ups go it’s ho-hum as it gets, feeling like a derivative of so many sci-fi games it’s barely worth pointing to any other than Outriders—a recent game already maligned for its lack of originality. The Cycle isn’t charmless or crass but its still that uninspired trope of treating space like a literal old west frontier with little in the way of introspection to elevate it, a letdown for a studio who once got the most of out of a tired set Up with Spec Ops: The Line.

Its specific aesthetics are as worn out as the premise, with your usual combination of bland jumpsuits, aliens-esque space armor and military rifles, with the occasional cowboy hat and southern accent to lazily set the tone. That doesn’t stop its alien planet from being lush though, with vibrant colors making all its green fields and glowing mushrooms pop on-screen. None of the landscape is especially memorable but it’s pleasing to the eye while you’re running around at least.

Getting off the planet with your prized loot requires calling for a dropship to come pick you up at a specific rendezvous which is visible to everyone, making it the tensest moment in a match. Nothing is stopping strangers extracting together but the player base is, unsurprisingly, pretty trigger happy. This however is made more difficult by the game’s showpiece: storms. If one of these violent suckers rolls in it’s time to take shelter and hold out as you can’t evacuate until it’s over. Neat an idea as it is, in execution, it’s kind of mostly a dreamy affair of waiting around in a cave until it’s safe. I couldn’t help but feel it could’ve been utilized better by forcing players to flee, rushing off world instead of simply waiting for it all to blow over.

For the most part though storms are infrequent and you will be running around a lot, constantly scanning and checking for minerals to find while evading or engaging other players and alien monsters. Those alien monsters are another letdown, seldom anything but snarling knock-offs you’ve seen in so many RPGs over the years. The crab ones, the dog ones… you get the idea. Functionally the only real difference between most of them is the amount of health they have which leaves them pretty lackluster to fight, in spite of the satisfying punch the game’s weapons have, so I spent most of time avoiding them. In fact, I spent most of my time avoiding anything, whether it be monsters or players, since there was seldom anything to gain from a fight unless I needed to harvest their organs for a quest.

Speaking of quests, when you’re not on the planet itself you’ll be on the station which acts like a hub for all your activities. You’ll go get jobs from factions, browse shops and sort out upgrades. It’s a cool idea to have a social space not dissimilar from Destiny’s tower or dozens of MMO hubs, but there’s very little to do there that isn’t simply running between kiosks to click ‘accept’ or ‘claim’ on quests and their rewards. Something that could easily have been a menu. It’s 2022 and I’m still playing games with the most tired, thoughtless fetch quest missions imaginable.

Yet The Cycle clearly wishes to showcase its polish at all times. Whether it’s the Halo ODST-like pod drops or the crunchy sound of its guns, there’s a high level of production value throughout which gives its tired elements a bit of a shine.

The most obvious comparison for some will be Escape from Tarkov, but for me, Hunt Showdown has been my go-to PvPvE game, and playing something like The Cycle illuminates all too clearly why. The thing that Hunt does so well and I find so compelling is it’s never about the rewards. Sure, there are unlocks and items worth coveting but the cheapest tools are just as good at seeing you through as the most expensive. No, what Hunt cares about is the moment to moment tension, the butterfly effect of each tiny choice made at the start of the match to its end. With its sole reward, its bounties, pushing players into confrontation and allowing canny players to devise ambushes or traps. Point is, your first match in that game can be every bit as exciting and rewarding as your last.

By contrast, The Cycle, with its emphasis on dozens and dozens of resource types to be gathered and funnelled towards an endless array of crafting, is fixed on the destination. Weapons, armour, ammo, attachments, backpacks… the list goes on. Even outside of the arsenal itself, there are upgrades for them all as well as upgrades for your apartment and its currency generators. The Cycle seems fixed on getting players onto its treadmill, more than it is making the most of its set up. With so many resources to gather and little inventory space at the games outset, I often found myself ready to evacuate within minutes of landing. Resources are abundant too so I often simply avoided other players since there was plenty enough on the map for everyone to get what they need. Arguably, you’d want to ambush other players for their gear but new players will have little worth taking. Higher level players will have better gear but, as a result, have an advantage, so you won’t really be able to take them on until you have something comparable. At which point, well, there’s nothing to be gained.

It’s a poorly thought out economy that seems hell are on creating a tired free-to-play progression path first and foremost, an interesting game second. This emphasis on resources and incremental upgrades buries the interesting things about the game. An abundance of resources could foster a different kind of player environment, with frequent co-operation instead of just constant murder but there’s little to no incentive to help others.

Player battles themselves are pretty dull, with too few options and victory largely coming down to who has the better stuff. On some rare occasions though I was able to tag along with a stranger and we’d help each other fight beasties or gather minerals before extracting together. In those moments the game took on a whole new life, as I tried to forge an on the fly alliance. Will this random person watch your back? Can they trust you? A trial by fire that hinted at how much more interesting The Cycle could be if it emphasized social interactions over its artificial grind. It’s more interesting than playing with friends too. Having some pals makes the drudgery more tolerable but puts you in an even more competitive space with no team ever willing to do anything other than murder, regardless of how meagre the rewards.

Unfortunately I also had my fair share of issues trying to play with friends thanks to bugs locking us out of matchmaking or forming a team.

What’s the point in having better stuff when what you can do with it isn’t very interesting anyway? I look at the potential dozens upon dozens of hours necessary to reach the game’s higher tiers and just feel bored at the prospect. Higher level weapons might sound a little better but the main difference is simply a higher damage number. There aren’t tools or utilities to unlock that can change how you play. No traps or decoys or any other gadgets that might open up ways to overcome well equipped players. Without any kind of narrative hook or any kind of subversiveness at all, and little moment to moment reward, a list of unlocks can’t possibly compel me to invest that kind of time.

The lingering question through my hours of boredom and frustration was, who is this for? Players seeking tense competitive stakeouts and shooting have many games they can play that aren’t burdened by the sheer tedium of hoovering up loads of meagre rocks. Those who love the treadmill of grinding and upgrading can play games (with vastly more interesting rewards) that don’t saddle that loop with the perils of being blown away by a player with more time or money.

Perhaps there is someone who wants the worst of both worlds, to relish every inch of progress dragged down to an achingly slow crawl. It’s not me.