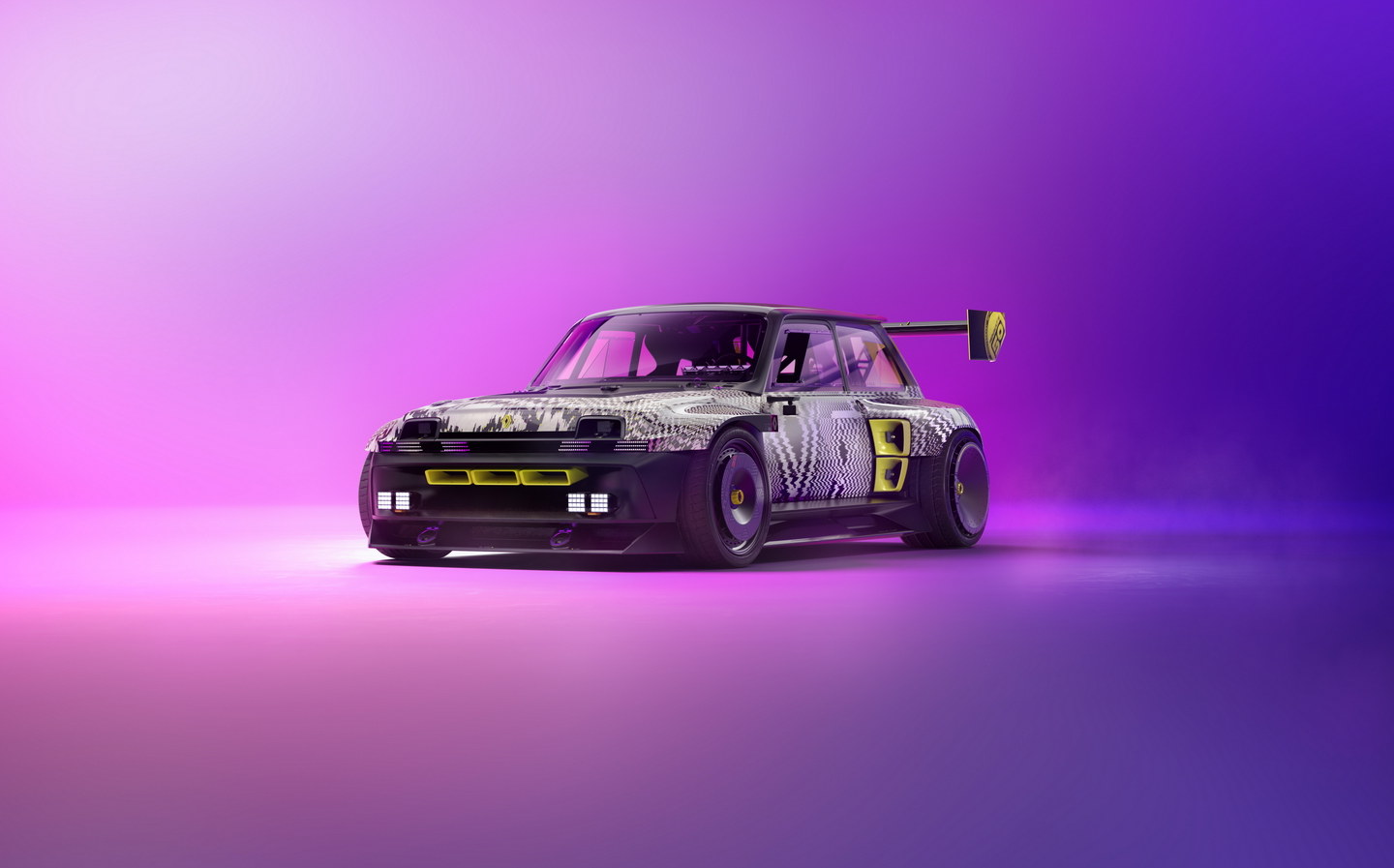 Renault is continuing to mark 50 years since the launch of its R5 supermini with the reveal of a one-off battery-electric drift car, its design based on that of the rally-bred 1980s Renault 5 Turbo.

One of a number of R5-inspired concepts already unveiled this year as part of the anniversary celebrations, the R5 Turbo 3E is the most extreme take on the old R5 yet, with over-the-top aerodynamic additions and design cues that have been inspired by video games.

The name — Turbo 3E — refers to the fact that the concept follows on from the rally-winning Turbo and Turbo 2, with the “E” offering a hint as to the powertrain.

Even in its day, the Renault 5 Turbo was very different from the original simple, spartan work of designer Michel Boué, who died before the R5 went on sale. The Turbo 3E goes further still.

The entire body is made from carbon fiber, and while it shares the recognizable shape of the old R5 Turbo, it has been brought bang up to date.

Grabbing your attention right away is the enormous rear wing, while the front and side splitters also serve in the name of downforce while making the 3E look more purposeful.

The boxy wheel arches are some 25cm wider than those seen on the old Renault 5 Turbo to accommodate the wider wheels and give the Turbo 3E extra presence. The old car’s characteristic air intakes integrated into the rear wheel arches are retained, once again channeling air to cool the powertrain.

Other modern touches that wouldn’t make the 3E look out of place in a cyberpunk future include the full-width front light bar, pixelated LED front fog lights — a modern twist on those of the original — and blue and yellow strips at the front and rear that flash when the car is going sideways.

What looks like an air intake on the bonnet is actually a charging port for the 3E’s 42kWh battery, which provides enough power for the 3E to perform for a few laps on track in a gymkhana display a la American drift king Ken Block.

That battery and the two electric motors it supplies haven’t been hidden away and, like in the old mid-engined R5 Turbo, they’re mounted behind the seats and plain to see when peering through the Plexiglass windows or through the viewing cut- outs above the rear lights.

Combined, the two motors develop 375bhp, a figure that’s nigh-on the same as that of the final R5 Turbo Maxi racers from the eighties, though with 516lb ft of instant torque on tap it should feel a lot brisker under acceleration, with the 0 -62mph sprint dispensed in 3.5 seconds.

The interior features its own fun little eighties-inspired touches with yellow and tartan colourways and a resident teddy bear known as Drifty. However, playful design takes a back seat (metaphorically — this is strictly a two-seater) to an interior more focused on the 3E’s role as a drift car.

The whole vehicle is built around a tubular chassis and the interior features an FIA-approved roll cage system, with carbon-fibre racing bucket seats, a full Sabelt safety harness and a specialized steering wheel (with a light-up Renault-badged boss) .

There’s an upright fly-off handbrake for easily coaxing the 3E into a skid, something for which the steering rack has also been designed.

Homage is paid to the bank of 10 analogue dials found in the old Renault 5 Turbo by 10 widget-style digital screens, which the company says is another element of the 3E that has been inspired by gaming.

To start the car, the driver presses the “Free Play” button on the center console, while the driving modes that alter the handling and power delivery have been named “Turbo” (for drifting), “Track invader” (for fast laps) , “Donut” (for 360-degree spins) and so forth.

Clearly understanding the visual appeal of a drift car such as the 3E, the designers have added 10 small camera mounting points inside and out for recording the car in action.

Another thing Renault clearly understands is the value of keeping the Renault 5 in the public eye at present.

Due to go on sale in 2024 is Renault’s replacement for the electric Zoe supermini. It will be based on the firm’s well-received retro-inspired Renault 5 concept announced in 2021.

The new Renault 5 will sit on the same Renault-Nissan Alliance CMF-B EV platform as the next-generation Nissan Micra (also due to be built in France), but even more enticing is the prospect of a hot, Alpine version.

While a sporty Alpine-badged R5 first emerged in 1976, in the UK it was known as the Renault 5 Gordini as Chrysler Europe then held the rights to the Alpine name in Britain.

For now, though, the one-off Renault 5 Turbo 3E is making its debut at the Chantilly Arts & Elegance event in France over the next few days before making an appearance at the Paris motor show in October, where Renault will unveil another car inspired by one of its classics — a new Renault 4.