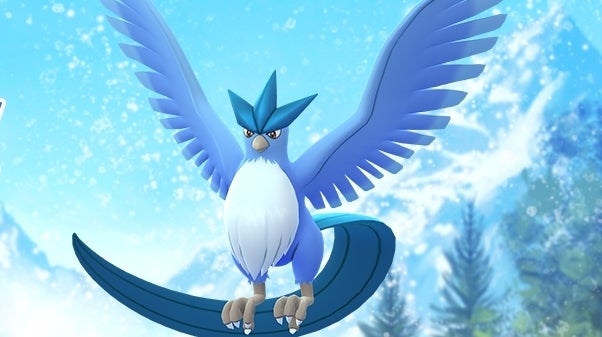 Articunothe freezer Pokémon and the first legendary bird to appear in the Pokédex, is best sourced from Pokémon Go raids.

Articuno may have been one of the first legendary Pokémon to appear in Pokémon Go, but you’ll still need a keen understanding of the various Articuno counters and weaknesses if you wish to catch it.

Like all legendary Pokémon, Articuno will appear in five-star raids. You may discover that you need to team up with a group of trainers to defeat Articuno, but, thanks to Remote Raiding, you can easily do this at home.

Articuno makes a reappearance during the Season of Go, appearing alongside Zapdos and Moltres during July 2022.

If you want to defeat Articuno in Pokémon Go, then you need to know what it’s weaknesses and counters are:

Below you can find the CP ranges you can expect to see when battling Articuno in a raid and if you earn the opportunity to catch one:

Articuno can use a variety of Fast and Charged moves in Pokémon Go, which are:

The Season of Go has arrived! The Pokémon TCG Crossover event is here, which includes the release of Wimpod and Golisopod. While Go Fest 2022 may be behind us, there are still three special research quests you might be working on – Pokémon Go Fest 2022, Rhi’s Arrival and A Radiant World. Meanwhile, the Great League and Great League and Great League Remix are currently running in the Go Battle League Season 11. This season has also seen the lowering of the level requirement for Candy XL and introduced the first Ultra Beast, Nihilego.

Everything we know about Articuno

Articuno, alongside Zapdos and Moltres, is a member of the first legendary trio to appear in the Pokémon franchise – the legendary birds.

With their status as being the first legendary trio, the three birds have set the standard from what we expect from a legendary trio or, in some cases, quartet. This includes sharing a type, in the bird’s case flying, a similar design, each bird reflects their primary type, and, when it comes to Pokémon lore, having a trio master, which would be Lugia for the birds.

Articuno is often considered one of the hardest Pokémon to catch in the original Pokémon games – Red, Blue and Yellow – due to its location at the bottom of the Seafoam Islands.

Not only do players have to keep their Pokémon battle ready as they trek through this multi-level dungeon, but their journey is hampered by the strength puzzles they will have to solve. Even if you do successfully travel from one side of the islands to another, there’s still a chance that you might have missed Articuno’s hiding spot.

For years, players have found themselves lost in the Seafoam Islands, wishing they had brought an Escape Rope, while Articuno sits in the depths of the cave probably having a good old laugh.