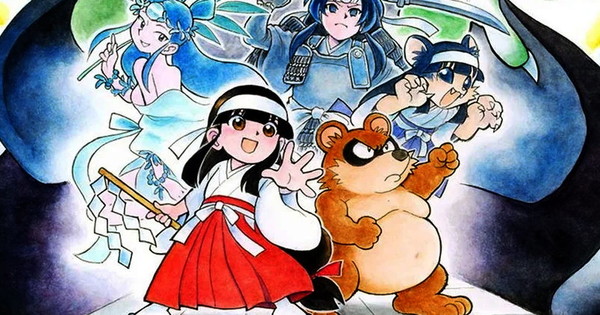 That’s because Reshrined tricks players into mistaking it for a simply prettier version of the 1993 Pocky & Rocky† You’ll find the same premise: shrine maiden Pocky and her tanuki pal Rocky set out to stop a mass of one-friendly local creatures from rampaging all over. The first stage leads Pocky through a shrine, the second takes Rocky around a forest, and both of them face routine enemies with basic controls. Three types of projectile attack are on hand, and the two heroes can swipe at enemies with a close-range move (Pocky with her wand, Rocky with his tail), dash across the ground, or launch a screen-sweeping bomb attack. It’s all straight from the Super NES game, and it’s still as enjoyable as it was almost thirty years ago.

and then Reshrined changes everything. A plot twist brings up the series’ recurring pantheon of local gods and sends Pocky and Rocky on separate paths through the past, the underworld, and a bleak, war-torn vision of floating warships and burning cities. The two of them meet other playable characters as well. The goddess Ame-no-Uzume floats around with lock-on magatama cannons, reflective mirror shots, and a spinning forcefield—while Pocky also gains the latter two abilities. The weasel-like Ikazuchi uses small duplicates and wields powerful versions of the basic three projectiles. The warrior Hotaru presents the greatest challenge by relying mostly on melee strikes, but those are the most powerful base attacks in the game.

The three members of Tengo Project may not be renowned across the industry, but Shunichi Taniguchi, Hiroyuki Iwatsuki, and Toshiyasu Miyabe are true veterans of the 16-bit era, having worked on ’90s Natsume fare like Wild Guns† The Ninja Warriors…and the original Pocky & Rocky† And just as the same team redesigned Wild Guns and The Ninja Warriors for modern systems, they give Pocky & Rocky such an overhaul that it seems unfair to label it a mere remastering or remake. More than half of it is an entirely new game.

Tengo Project’s skill with 2-D pixel art and animation is on nonstop display in Reshrined, even beyond the amusingly animated yokai creatures and enormous boss monsters. Leaves flutter across the cobbles of a shrine. Skeletal arms and jointed centipede creatures snake out of the walls in the underworld. And in the game’s best stage, Pocky storms a high-tech flying fleet (resembling the fortress from Secret of Mana) and leaps between the airships as they collide over a city in flames. For a game with such cute characters, Reshrined is never afraid to get a little intense in its overtones and demanding in its gameplay.

Reshrined further refines its overhead action-shooter formula, sending enemies from all directions and challenging players to strategize whenever they can. Each of the three projectiles has its strengths, and powering them up to their fullest provides a satisfying burst of destruction. Some foes are best defeated with close-range whacks that deflect their shorts, and others are immune to any projectiles. Tools like Pocky and Ame-no-Uzume’s mirrors let players angle their fire while hiding, and Hotaru’s limited range encourages defensive play. And if you want the pure power fantasy of wrecking everything, just go with Ikazuchi and that giant fire-laser.

Not that you can cruise around like a Contra command with 29 lives in reserve. Reshrined is tough on incautious players, with some particularly fiendish bosses that blanket the screen in fireballs or spat-out seeds. Continues are unlimited but wisely kick players back to an earlier point in the stage. Reshrined isn’t a very long game in relation to today’s mandatory 30-hour blockbusters, but it’s a rigorous challenge, refusing to let players through a level or past a boss until they’ve learned and adapted. It’s a game that makes you remember it.

If there’s one thing missing from the various attacks and play styles, it’s the ability to walk in one direction and fire in another—strafing, in other words. A fairly standard feature in many overhead shooters, it’s only a special move in Reshrined† Rocky can summon a tanuki-powered palanquin to carry him so he can strafe, and that’s sometimes hard to deploy in the thick of battle. It’s certainly not as convenient as independent controls for moving and firing would be.
Pocky & Rocky Reshrined also made the strange decision to initially seal away the original game’s biggest selling point: the two-player mode. You’ll have to finish the game once to unlock that co-op feature and twice if you want all of the characters (either Hotaru or Ikazuchi is skipped the first time through). And while bringing along a friend adds a lot to the game, at this writing you can team up only locally—there’s no online multiplayer to be had. A super-easy mode and some other features require you to collect coins, which again mandates more trips through the game.

Yet return tours of Pocky & Rocky Reshrined are never a chore. It’s a marvelous reimagining of an already enjoyable overhead action game, paying tribute to a classic while standing taller than just about any of its genre relatives. Pocky and Rocky have waited a long time for a proper comeback, but if there’s any game that’ll win them a new crowd of fans, Reshrined is it.