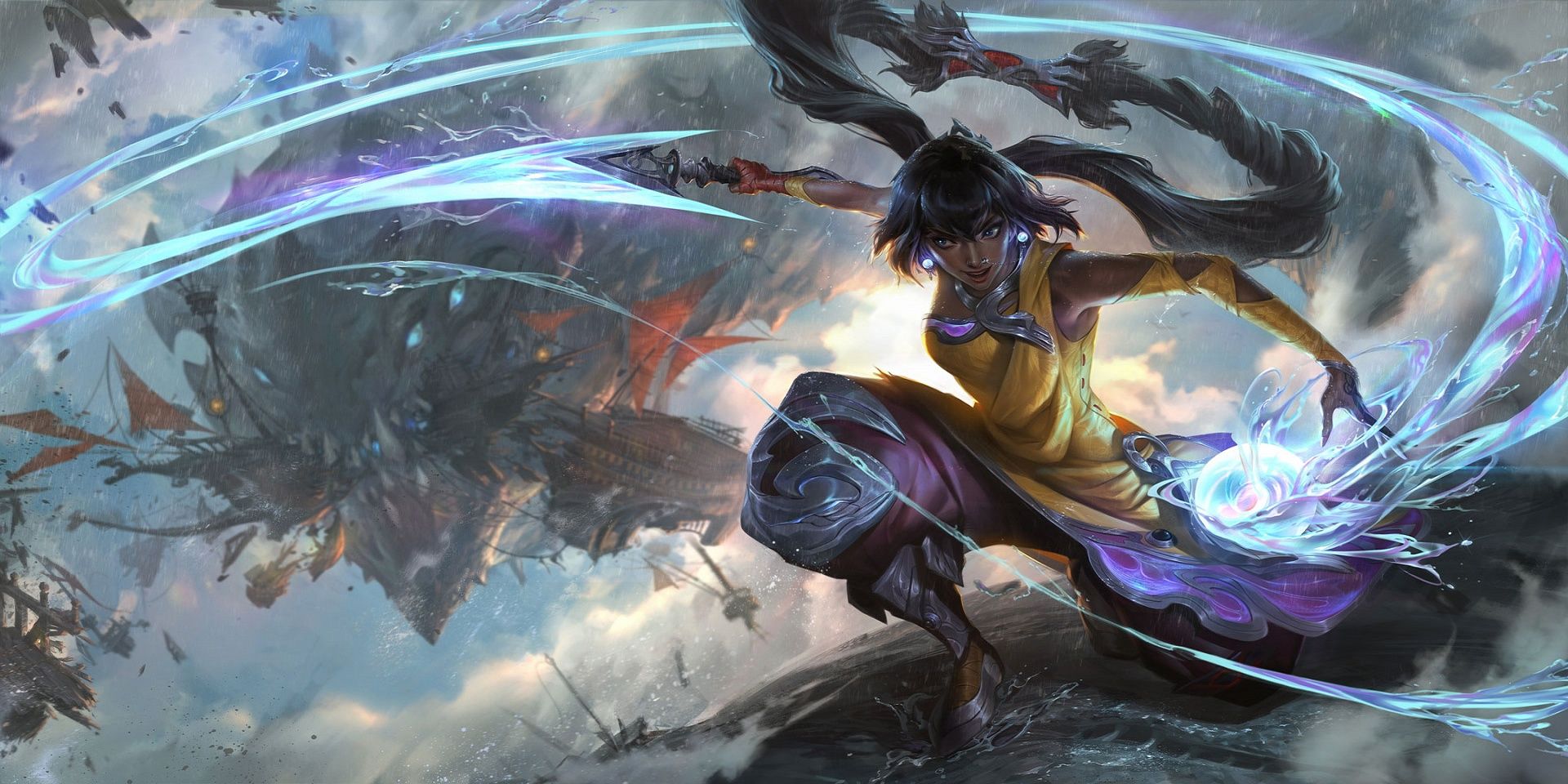 Riot Games has recently published a new trailer for an upcoming League of Legends champion called Nilah. The initial video was positively received and fans were excited to learn more about the champion. However, the popular reveal & preview channel, Skinspotlights, released a video that showcased Nilah’s abilities and passive. Gamers negatively commented on Nilah’s generic design, overpowered passive, and lazy kit which all exhibit League of Legends‘ current issues with the champion design.

This new marksman draws inspiration from South Asian cultures and uses a flowing water whip as her main weapon. Nilah differs from the typical ADC role due to her aggressive abilities and her passive. Furthermore, fans have accused Riot Games of recycling previous characters since Nilah is extremely similar to another marksman released nearly two years ago called Samira. Below are details regarding Nilah and how she exhibits the game’s major problems.

Related: League of Legends’ Hardest Challenges (& How to Complete Them)

Typically, every ADC has a support player that helps them survive the game and ward off dangerous enemies. These two players share gold and experience, which are crucial resources in the game. Meanwhile, Nilah’s passive, Joy Unending, allows her to ignore the resource split and gain experience for both her and her ally to level up faster. In League of Legendslevel differences between players can often be the deciding factor in whether a fight is won, meaning that having a level advantage almost guarantees victory.

It is also important to note that this isn’t the first time Riot Games introduced an experience boost. In the title’s early days, a champion named Mordekaiser used to have a similar passive that gave him double experience. However, Riot removed that ability entirely after realizing how dominating it was. This is why players are afraid that Nilah will have the same issue and become unbearably overpowered in the early game to the point of becoming frustrating to play against.

Furthermore, players have accused Riot of lazy design since Nilah does not provide any new playstyle to the game, mimicking every ability from a previous champion, Samira. When Samira was first released in League of Legends, she was ridiculously powerful and oppressive, as she had the ability to kill an entire team with a single ability. Fans are afraid that if Nilah and Samira do share the same types of abilities, Nilah’s launch state will be similarly overpowered.

For instance, Nilah’s Q – Formless Blade and Samira’s Q – Flair are both abilities that deal damage in a cone. Nilah’s W – Jubilant Veil and Samira’s W – Blade Whirl grant the two champions momentary invulnerability that cancels all projectiles fired towards them. To add insult to injury, Nilah’s E – Slipstream is a dash toward an enemy unit, which is identical to Samira’s E – Wild Rush.

In League of Legends, a champion’s ultimate ability defines that character and grants them their identity. For example, Caitlyn’s R – Ace in The Hole precisely shoots a champion to deliver a perfect death. Her ultimate drives home the point that Caitlyn is a sharpshooting police sniper, which was also the main idea portrayed in the popular Riot animated show, Arcane† Nilah’s ultimate – Apotheosis does not synergize with her other abilities. Her basic skills paint her as a slippery ADC that relies on her team and healing to survive fights. Meanwhile, her ultimate forces her to dive into the team to utilize it to its full potential. This clash in design represents the current problem with Riot’s champion design as a whole.

Related: Is League of Legends Patch 12.10 Enough to Fix the Game’s Balance Issues?

It is important to note that Riot Games designer Blake “Squad5” Smith was responsible for the creation of both Samira and Nilah, which could explain their similarities. However, this does not excuse Nilah’s flaws and power. Riot should be responsible for ensuring the quality and identity of Nilah. Fans shouldn’t be able to call her a re-skinned Samira or Samira 2.0.

In spite of her glaring similarities with Samira, Nilah manages to visually captivate players with her bright and vibrant colors and unique water whip weapon. Currently, the biggest concern about Nilah is her oppressive passive which grants both her and her support level advantage that can oppress lanes. Only time will tell whether Nilah becomes an overpowered must-ban ADC or an unremarkable marksman. Nilah will be available to play once patch 12.13 releases on July 13.