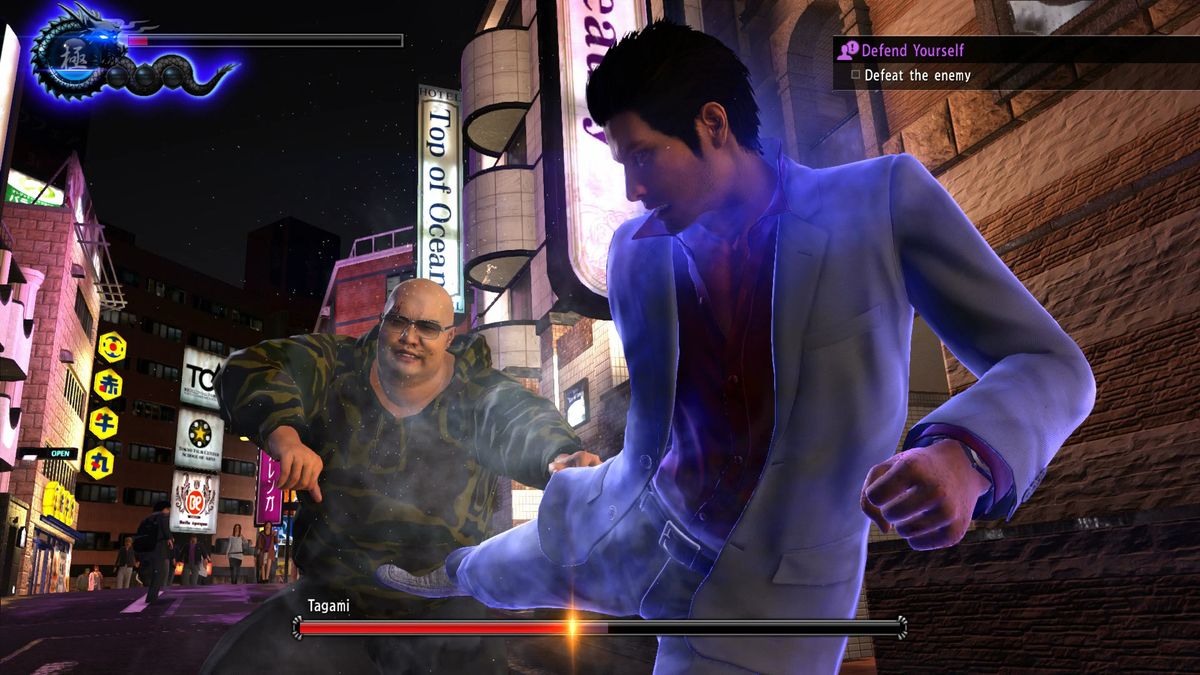 A year ago, I wrote about how Yakuza is the perfect series for Xbox Game Pass. Since then, I’ve worked my way through more than half of the games. I’ve experienced the soaring highs of Yakuza 0 and the shrugworthy lows of Yakuza: Dead Souls – which isn’t even that bad, really. By now, it’s safe to say I’m a fan of the series. That’s especially true since Yakuza 6: The Song of Life has, essentially, been part of my medical regime for the past few weeks.

The mean streets of Kamurocho

Without going into gory detail, I’ve been dealing with a podiatric medical issue for the past year or so. The latest treatment method has been the most aggressive yet, and I’m under doctor’s orders to sit on my couch, with my foot propped up, for as many hours per day as possible. Apart from the gnawing pain, this might sound like a gamer’s dream come true – but trust me, it’s not. You would be amazed how same-y even really good games can start to feel after a while.

While Yakuza 6 isn’t perfect in this regard, it does remind me why the series has held my interest so consistently, while other open-world games tend to lose me after a while.

In case you haven’t played a Yakuza game before, they all follow a pretty simple formula. You play as ex-yakuza Kazuma Kiryu, and occasionally a handful of his associates, in the fictional Tokyo district of Kamurocho. Kiryu inexorably gets drawn into a complex crime drama that threatens the whole Japanese underworld. He puts things right by getting into a fistfight with every single person responsible, often shirtless, and usually with a baseball bat or bicycle wheel in hand.

If Yakuza were a linear brawler, this would probably be a recipe for boredom. But Yakuza is a semi-open-world game, with a ton of interesting side activities and minigames to pursue. While the main plot is often dark and brooding, the side quests are usually silly, hilarious or just plain weird.

Case in point: Yakuza 6’s main story involves Kiryu investigating a gang war between the Japanese yakuza and the Hong Kong triads, all while trying to unravel the mystery behind a hit-and-run accident that left his surrogate daughter comatose.

In Yakuza 6’s side quests, I’ve collected stray cats for a cat café, participated in risqué video chats, met a time traveler, stopped a rogue AI from conquering humanity, gotten drunk with a bunch of barflies, recruited an army to fight in real-time strategy battles against a rival gang, and sung karaoke while dressed as a mascot with a giant orange for a head. In short, there’s a lot of variety.

That level of variety is a surefire panacea against the boredom and bloat that tend to set in after a few hours in most open-world adventures. Games such as Assassin’s Creed Valhalla and Infamous Second Son (other titles I’ve dabbled in during my sojourn on the couch) tend to laser-focus on a handful of activities and make you do them over and over, in slightly different locations. Whether you’re clearing out an enemy camp, chasing down a stray collectible or finding a hidden quest objective, the gameplay boils down to combat or traversal, with perhaps a simple puzzle if you’re lucky.

Compare and contrast Yakuza 6, which has about half-a-dozen different games built into its side quests. It’s a brawler for the most part, but it’s also a real-time strategy game, a baseball management simulator, an arcade collection, a visual novel, a rail shooter and a virtual mahjong parlor, among other things. The simple, straightforward melee combat would probably not carry Yakuza 6 for dozens of hours – and it doesn’t have to.

Another thing I appreciate about the Yakuza series is that it’s fairly platform-agnostic. It started life on PlayStation, but over the past few years, most of its entries have migrated over to PC and Xbox, too. (You can still get Yakuza: Dead Souls only on PS3, but it’s arguably not worth the effort.) One interesting thing about the Yakuza series is that for a while, you could play essentially the whole franchise via Xbox Game Pass. In fact, it’s probably what sold me on the series in the first place.

Without rehashing last year’s article about Yakuza and Xbox Game Pass, I first encountered the series through Yakuza: Like a Dragon on the Xbox Series X. The gameplay was fun, but I had absolutely no frame of reference for the game’s mechanics, tone or even its setting. A short time later, I logged into Xbox Game Pass and discovered that I could play the first three games in the series, with the next three to follow shortly.

As such, my entire experience with playing Yakuza has been seamless. I would open the Xbox Game Pass menu and select a game. I’d download it and play it to completion. I’d then download the next game, get a save bonus for my efforts, and start the process again. I didn’t have to hunt down used copies or wait for digital sales; since I had a yearlong Xbox Game Pass subscription, I was already paid up. While it’s true that I don’t own any of these games, each one also takes a few dozen hours to complete, so I think one playthrough apiece will be sufficient.

While Xbox Game Pass offers a number of benefits – day one first-party games, smartphone compatibility, cross-save functionality – I think the way it handles series is one of its best features. You can go from “mild curiosity” to “having the entire series downloaded” within a matter of hours, and you can do it for franchises as diverse as Yakuza, Gears of War and Dragon Age.

Granted, Xbox Game Pass has its ups and downs, like any other service. And if there’s a significant advantage to playing Yakuza on Xbox over PlayStation, I can’t find it. (I have heard that the PC versions can be a bit buggy, but isn’t that often the case?) But to me, the Yakuza series and Xbox Game Pass go hand-in-hand. The fact that you can no longer play Yakuza 0, Yakuza Kiwami or Yakuza Kiwami 2 on Xbox Game Pass is a big blow for both properties, as far as I’m concerned.