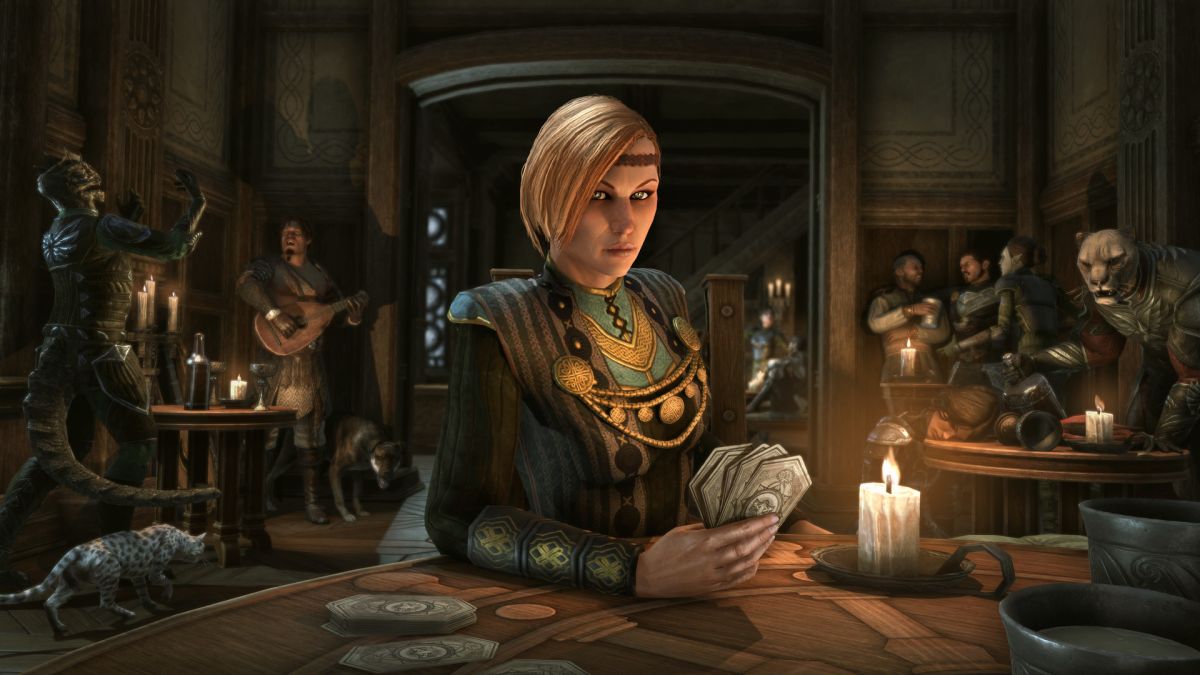 There’s a point while playing Elder Scrolls Online: High Isle that I think out loud, “This could be its own standalone Elder Scrolls game.” I’ve wondered if the same could be true of the MMORPG’s other yearly expansions, particularly the Skyrim-inspired Greymoor and its Oblivion equivalent, Blackwood, but High Isle excels itself by introducing a brand new side to Tamriel, proving Zenimax Online’s ability to craft dynamic, living worlds from whole cloth to rival Bethesda’s greatest.

High Isle is a triumph; nostalgic in the way its more grounded story captures the vibe of legacy Elder Scrolls games, yet fresh and exciting for the same reason. The last few years of Elder Scrolls Online have been about saving the world from existential threats, be that necromancers and dragons, vampires and harrowstorms, or the Prince of Destruction himself, Mehrunes Dagon. This time around, the story is less epic and more political, personal, and frankly, intriguing. Comparisons have been made to Game of Thronesand I think that’s warranted.

The plot of Elder Scrolls Online: High Isle is centered around a tenuous struggle between rival factions that heats up when denizens of the city’s underbelly begin to rise up against the nobles. The way it unravels to involve layers of conspiracy adds a refreshing depth to the characters and their motivations, leaving you with more questions than answers even after you’ve exhausted all of the dialogue options in an interaction. The sympathetic character you meet today could be trying to kill you tomorrow, and you’ll be kicking yourself for not realizing the signs of betrayal earlier. Again, it’s a big departure from the dark magic and cataclysm that’s come to define Elder Scrolls Online, and the return to roots is a big win for High Isle.

Without spoiling too much, the story kicks off when the enigmatic noble Lady Arabelle asks you to help investigate her missing ships and warns you of the increasing presence of the Ascendant Order, a secret guild of knights hellbent on dismantling the hierarchy. To be frank, I found the order’s convictions understandable, relatable even, but they want you and a bunch of rather likable characters dead, so they have to go. Still, High Isle does a great job setting up a villain with dimensions, but also making you care enough about the protagonists to feel motivated about what you’re doing, which is key to this chapter’s compelling narrative overall.

A high point for high society

Elder Scrolls Online: High Isle is part Game of Thrones, part classic Elder Scrolls, and something altogether new. The chapter takes you to the never-before explored Systres Archipelago, which encompasses the center of Breton high society, High Isle, and the forested prison island Amenos. The former offers a verdant, coastal vacation destination for Breton lords and ladies, and it’s easy to see why people spend their holidays here. The many ornate medieval buildings and towers surrounding Gonfalon Bay give a commanding view of the glistening southeastern seascape, and sunflower groves brighten the countryside surrounding the castles. The region is usually fairly sunny but can occasionally glow under misty, scattered clouds and patter with the light rain.

Around the bay and capital city, magnificent statues stand prominently, which give you something to gape at but – like the Stonehenge-esque ruins scattered around the island – also hint at the region’s history, which I hope will be explored more as this year- long story unfolds. Notably, there’s a distinct lack of fire-breathing dragons around High Isle, which is probably another reason people like to take their holidays here.

That being said, there’s a lot of variety in High Isle, and of course it’s not all befitting of Breton snobbery. In fact, most of the island is nature untouched or reclaimed, textured by treacherous stone formations and Stonehenge-like ruins, old shipwrecks, active volcanic vents, and caves, and of course all of those places are crawling with Ascendant Order faithful and fantastically violent creature.

Narratively, by far the most interesting new area is Amenos, a much smaller island that lies adjacent to High Isle and where criminals are sent to live out the rest of their lives in exile. I won’t spoil anything, but from both a design and narrative perspective, this primal jungle overgrowth stands out among Elder Scrolls Online’s best original locales.

Everything from High Isle’s dungeons, to the charming new companions (a street-wise, magic-wielding Khajit named Ember and the honorable knight Isobel), to the new Dreadsail Reef trial, and even the new Tales of Tribute card game that I was sure I would dislike but which nevertheless pleasantly surprised me – it all represents the best this MMO has to offer, now in its ninth year. It’s proof positive that the team at Zenimax Online is as passionate about the game as it’s ever been, and it shows just what the devs are capable of when firing on all cylinders.

Despite my liking this chapter more than any that’ve come before it, High Isle isn’t perfect. There’s the familiar, but admittedly annoying bugs I’ve come to expect when a big new chapter releases – all of the druids are conspicuously missing torsos, for example, and there’s an unreachable treasure chest at the bottom of a pond near Stonelore Falls. Nothing game breaking, but it can definitely break immersion here and there.

More importantly, I hope Zenimax Online is emboldened by the reaction to High Isle’s story and the way it refreshes the formula somewhat; I want to see more of that, and on a more fundamental level. You’re still asked to help someone with something, sent to investigate strange goings-on, and eventually led through a couple of new dungeons to kill the big bads. The new quests are joined by new world events, new items, achievements, and so on. Again, the studio deserves praise for High Isle’s original story and world, but as the game approaches its first decade, it feels like the right time to change things up in an even bigger way.

That said, Elder Scrolls Online is like a well-oiled machine at this point. It knows what it’s freakin’ doing, and it works like a charm. If you were once an Elder Scrolls Online regular but haven’t played in a while, you’d do well to check out what’s new in High Isle, as one final time, its world seems to have been built with the same level of love and care as any mainline Elder Scrolls game. Whether you’re keen to give Elder Scrolls Online a try, curious about returning after a little break, or just desperate for more from this universe while we wait for Elder Scrolls 6High Isle should make for a compelling entry point and a well-timed change of pace for longtime fans.