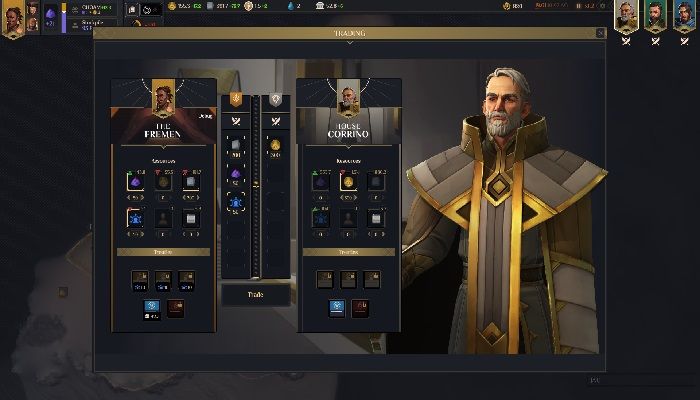 In its latest update, Shiro Games and Funcom have added House Corrino, the latest playable faction, to Dune: Spice Wars. The team is also marking having the second of four milestones on its previously-announced roadmap.

The arrival of House Corrino on Arrakis is something its representative doesn’t really want to be doing. Of course, that’s Shaddam IV, the Padishah Emperor. If you’re playing as this faction, you’ll have access to some unique strategies. Not only do you command the renowned and ruthless Sardaukar to go and fight for you, you have the ability to influence, and even sabotage, the CHOAM market (which also comes with this update) and the Landsraad. You’ll have to pay the Spacing Guild’s fees though being around also entitled you to collecting spice taxes, and you’ll earn Hegemony by paying those fees. There’s a balance in there that you’ll have to find if you want to come out on top.

Your strategies as House Corrino are not necessarily going to be as direct as with other factions. You have the ability to manipulate the market, influence other factions, and even turn them against one another. Your faction bonuses, Imperial edict, can switch the scope of a resolution, for instance. Political intrigue and influences are some of your most important skills. Of course, you do have an army and fighters if you need them, but this Imperial faction is definitely bringing a different flavor to the factions roster.

Other changes in this update have been made for balance as well as to accommodate the arrival of the Emperor and his faction. These include reworks of the Fremen in the economy, the CHOAM market, and more changes.

See the full notes about at Dune: Spice Wars.