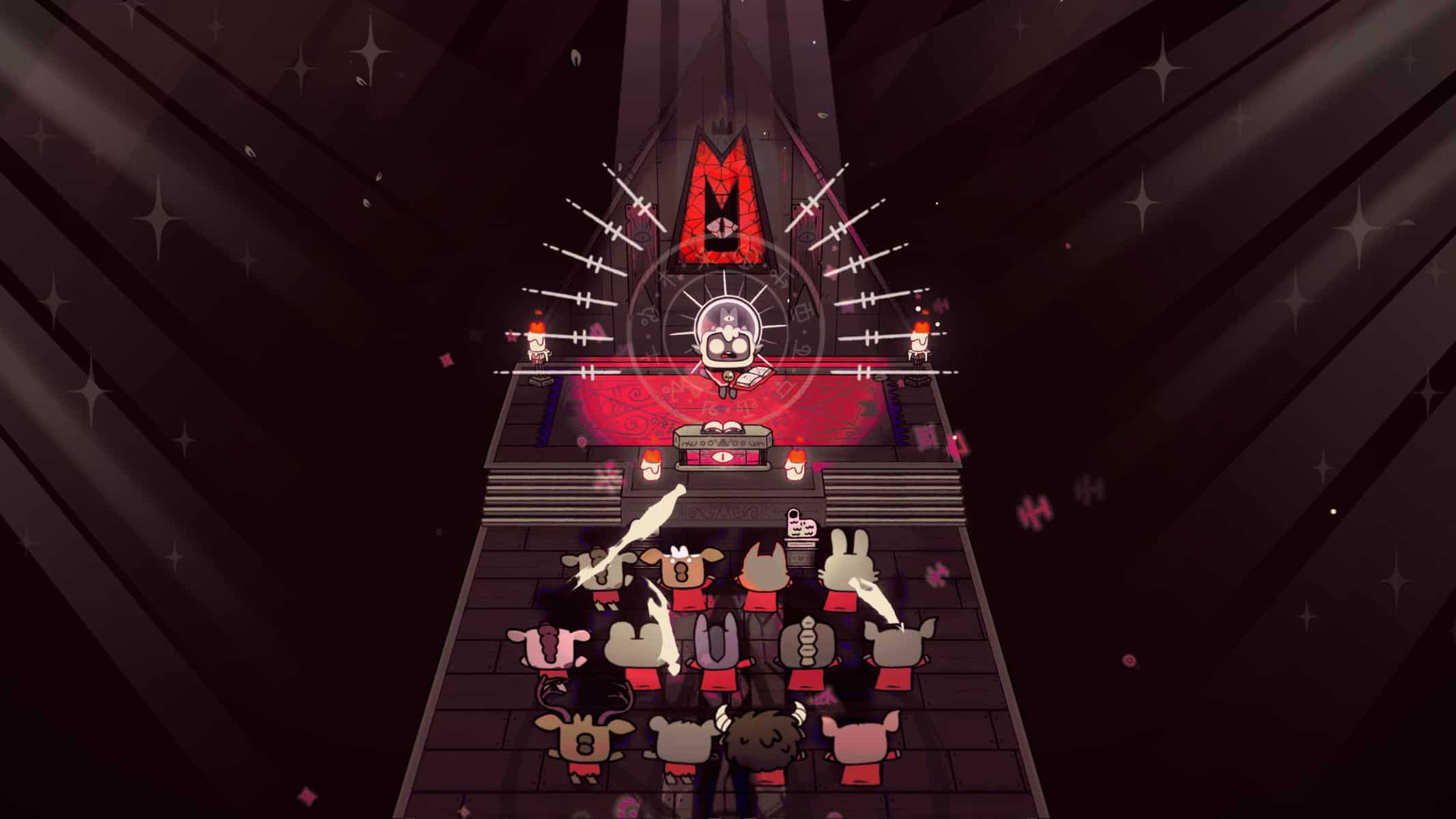 In the constantly ongoing quest to create a rogue-lite game that can dethrone the kings, there’s been a lot of creations, both mediocre and amazing. Madshot, Hades, Dead Cells, Nuclear Throne, realistically we could make this entire preview just a list of released rogue-lite games and we’d still barely be scratching the surface. Cult Of The Lamb sets out to prove itself among the crowd, to find a way to get on top of the massive pile of rogue-lite games, in order to stand alongside the greats such as The Binding Of Isaac: Repentance.

In order to actually make this climb, a game needs to be inventive in the way that it goes about things, while still perfecting the elements we expect from a rogue-lite game. We were able to play the game early, but was it fun? Could it finally step on top of the pile? Let’s jump in, find out and join the cult.

Join The Cult Of The Lamb!

For those without any context for what this game is, in Cult Of The Lamb you play as, funnily enough, a lamb. You were deemed a sacrificial lamb, a heretic marked for slaughter, which is where the game opens. You’re executed for your crimes against religion and belief, yet are resurrected by a mysterious and ominous stranger to do their bidding. You’ll cut through huge hordes of enemies, and massive bosses and amass a great following in order to please your savior. Visually the game takes what would generically be known as an extremely cutesy and child-friendly art style and flips it on its head, creating a gory and terrifying world filled with abominations that HP Lovecraft himself would be proud of, with the material that the game touches upon also being a more twisted version of what you might expect from a children’s nursery rhyme or cautionary tale.

This means that in terms of the gameplay, it’s pretty much exactly what you’d expect from this type of game. As the lamb, you pick up new weaponry such as an ax, a sword, or a dagger, while you also pick up special weapons given to you from the gods themselves that range from area of ​​effect attacks to firing projectiles at your enemy. This is likely just a small slice of what you can expect from the final game, but what IS here is still really fun to mess around with.

While oftentimes rogue-lite games can feel unfair or unbalanced in terms of difficulty, Cult of the Lamb fully manages to avoid this pitfall. It feels extremely fair, meaning that any failure or death is all on you, the player, rather than the faults of the game itself. Unlike many rogue-lite games it also has multiple different difficulties (Easy, Medium, Hard, Very Hard) which means that regardless of how much you play these types of games, you’ll still be able to try it out.

The aforementioned abominations really shine when it comes to the bosses in the game. Within this preview, we saw four different bosses, which is the amount you had to beat to get to the final boss of the first area, Leshy. They’re all different, each of them having different attacks and different patterns that you have to learn in order to survive. Then you reach the final boss, Leshy, and find every single thing that you have to learn thus far tested to take out the boss, which means dodging ranged attacks, hordes of enemies that are just… fired at you, and melee attacks. You’re given a not unsubstantial amount of health, but it’s small enough so that you’ll be constantly on the side of caution when fighting enemies in case you die, again.

There’s the side of gameplay you’d expect from this type of game, at least. There’s also the stuff that you really probably don’t expect from a rogue-lite game: the management simulation elements. So in Cult of the Lamb, you’ll come across various different animals throughout your journey and are able to save them. Once you’ve saved them you can indoctrinate them into your cult and use them to harvest various plants and elements around your camp.

Of course, in order to do this, you’ll also need to build structures such as a temple, a shrine, and more to harness their potential. As the leader of the cult, you’re able to give instructions to your followers in order to make them do exactly as you want, but you can also give sermons (once you build your temple that is) which will result in various different boons and boosts to your cult. That’s not to say it’s all bonuses when it comes to your camp of followers though, no, not in the slightest.

In order to keep morale up in the camp, you need to clean up after your followers, or else risk them getting sick and dying. You need to build structures such as sleeping bags so that they have places they can sleep comfortably, and you need to gather up berries and other ingredients so that you can make food to feed them. Your followers result in bonuses to you yourself, so keeping them as happy as you possibly can and making sure that they don’t die is paramount to your success, else you’ll just flounder and become stale in the field.

Cult Of The Lamb is incredible, there’s no way around it. The way the rogue-lite elements blend so seamlessly with the city-builder elements and management sim sections of the game is something that you really have to see to believe, a concoction blend of genres that you would absolutely never expect to see placed so close to one another. If the entire game can keep up the sheer quality that’s on display throughout this preview, then this isn’t going to just be one of the greatest rogue-lite games ever made. This is going to be one of the greatest games ever made. With only a month left until the full game releases, it’s looking like it could be game of the year material.