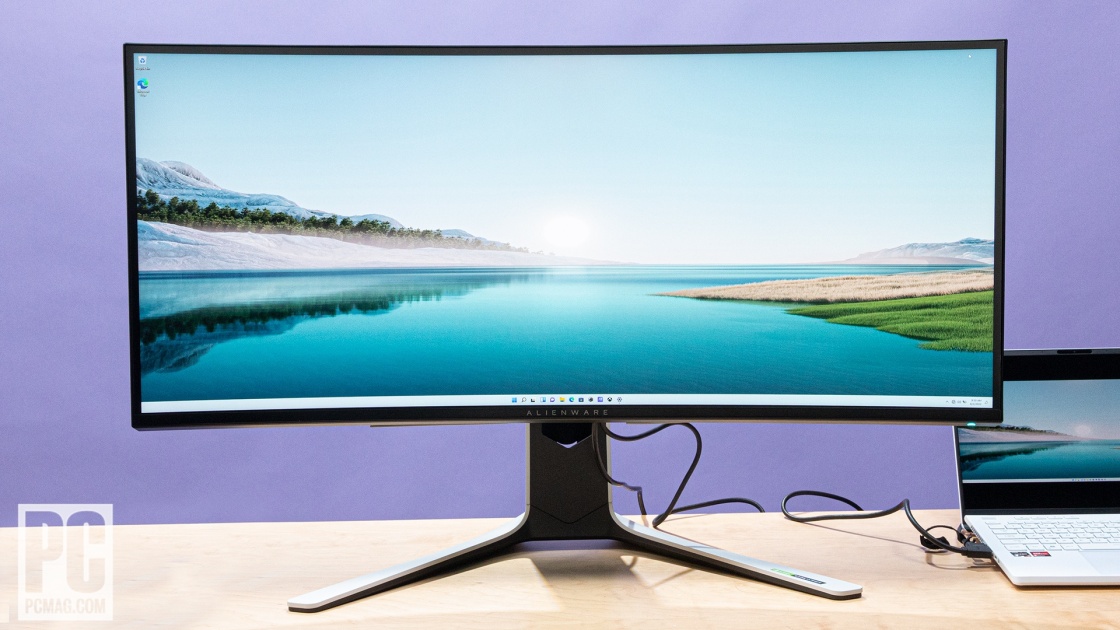 Another day, just another curved gaming monitor? Don’t bet on it! Today, courtesy of Alienware (Dell’s long-running gaming-focused subsidiary), we have a mega-panel that’s impossible to ignore on any surface it dominates. The $1,459 Alienware 38 Curved Gaming Monitor (AW3821DW) is a big, beautiful WQHD+ display (3,840 by 1,600 pixels, in 21:9) that strives to provide immersive gaming and cinematic experiences. It’s impressive on paper and intimidating in person, but its input lag and HDR test results fell just a bit short of our expectations for the money. It’s a fine monitor, but one that doesn’t impress as much as some of Alienware’s other offerings, especially the excellent (if slightly smaller) Alienware 34 QD-OLED.

Taking Your Gaming to XXL Sizes

Large monitors like the Alienware 38 take up a lot of space on your desk, so it’s only natural that it should look good while doing so. The 38-inch screen is bordered by a thin black bezel without any other gamer-centric embroidery on the front face. It’s clean, with just the Alienware logo at the center of the monitor. The stand is surprisingly sturdy, and its height can be adjusted up to 5.1 inches, and swivels about 40 degrees.

The monitor measures 17.7 by 35.2 by 11.6 inches (HWD) with the stand, and weighs just under 27 pounds. It’s exceptionally light for its size, even lighter than the BenQ Mobiuz EX3410R and the Alienware 34 QD-OLED (with their stands, of course). For those interested in mounting the monitor on an arm, the panel itself weighs roughly 17 pounds.

You’ll find the monitor’s power button in the lower right-hand corner, with a customizable RGB light ring around it. Just behind it, you’ll find four buttons and the OSD control stick, which give you quick access to the input source, brightness settings, and AlienFX lighting controls. No gaming device is complete without bright, blinking lights, right?

Behind the monitor, you get the full gamer treatment. You’ll see some familiar Alienware design, including the LED backlight that provides that distinct gamer glow, wholly customizable with AlienFX. A removable panel covers a USB hub flush with ports that include two HDMI 2.0 inputs, a DisplayPort 1.4 in, four USB 3.2 Gen 1 ports (one upstream and three downstream at 5Gbps), the holes for a VESA mount, and a headphone jack. Missing, however, are a USB-C port and an HDMI 2.1 port, notable omissions that are quickly becoming commonplace in the monitor space.

Turning our attention back to the display itself, the panel is based on Nano IPS color technology. Dell claims that it offers wider color coverage than sRGB. (More about that in a bit.) The Alienware 38 is also rated for VESA DisplayHDR 600 and should cover 95% of the DCI-P3 color space across a wide viewing angle—both claims we’ll investigate below.

The 3,840-by-1,600-pixel display includes a 2300R curve and a 21:9 aspect ratio. When considering a curved monitor, tighter curvatures actually help deliver deeper perceived blacks and reduce glare, which in turn leads to better immersion while gaming. And speaking of immersive gaming, the monitor supports a 144Hz refresh rate via DisplayPort only. The maximum refresh drops to 85Hz when connected via HDMI. Nvidia G-Sync Ultimate is also supported, which should ensure a smooth, tearing-free experience across your games when used with a compliant GeForce video card.

Interestingly, the Alienware 38 also claims a 4ms gray-to-gray (GtG) response time. GtG measures how long it takes for a pixel to transition from one gray level to the next. It’s not a standard measure, though, because vendors measure levels differently. The same applies to other measurements like black-white-black (BwB) and white-black-white (WbW), both of which are not standardized and can be misinterpreted.

Beyond that, and easier to nail down: Input lag will be critical for this kind of elite panel. We rely on the HD Fury 4K Diva(Opens in a new window), a video upscaling tool that also happens to have an input-lag tester inside, which has lowered the floor of our testing all the way to 0.5ms. We’ll dive into the details in the next section below. (Or, first read more about how we test monitors.)

Testing the Alienware 38: Not Quite the Monster the Cabinet Suggests

The Alienware 38 looks the part of a high-end monitor, but to really understand what’s going on under the hood, we ran it through our standard gaming monitor tests using the Datacolor SpyderX Elite(Opens in a new window) Tool and its companion software. First, we test the display in its default picture mode with an SDR signal. Here, the Alienware 38 reached a brightness of just 212 nits and a black level of 0.28, which yields a contrast ratio of 770:1. That’s under Dell’s promised 1,000:1 rating.

The higher the contrast ratio, the deeper the blacks and the brighter the whites a monitor can produce. It makes a huge difference in picture quality, especially during dark scenes in gameplay. Since 1,000:1 (the standard for IPS panels) is the lowest contrast-ratio rung among gaming monitors, missing the mark in SDR mode is a bit disappointing. It’s a fairly dim display compared with other large gaming monitors like the Asus ROG Strix XG438Q.

Switching to HDR mode provided better results, but not by much. The brightness more than doubled, to 463 nits, still failing to meet the promised DisplayHDR 600 standard.

Color accuracy was also in the monitor’s favor, with an average Delta E result of 1.49. When parsing color accuracy, a higher Delta E number means common colors tend to stray from the “purest form” of a color. This is likely more important to content creators than your typical gamer.

Your typical gamer, however, will be interested in our next section.

The Alienware 38 is a curvy ultrawide gaming monitor first and foremost, so of course, we had to measure the most important stat to hardcore gamers—the monitor’s input lag. Using the HDFury 4K Diva matrix, we registered a lag measure of just 4.4 milliseconds. That’s excellent, since 15 milliseconds or below is good enough for most gamers. If you’re a competitive player or someone who takes esports seriously, you’re going to want a monitor with as little input lag as possible, and the Alienware 38 is certainly up to the challenge. We have seen some sub-1ms models, notably from MSI, but you’re getting into small distinctions at this level that most casual players will easily ignore.

I played Shadow of the Tomb Raider (a game that still looks fantastic, especially on ultrawide monitors) and a few rounds of Halo Infinite. Results were smooth, and the visuals looked good. Not every game supports ultrawide-monitor native resolutions like 3,840 by 1,600 pixels perfectly, however, so keep that in mind as you shop. Non-gaming viewing was also quite nice, and the anti-glare 3H hardness does a good job at preventing annoying sidelight reflections when viewing from different angles.

The Verdict: Can’t Avoid the Shadow of QD-OLED

Despite its attractive build and lighter-than-average weight, Alienware’s 38-inch curved gaming monitor doesn’t hit every mark you’d expect from a screen this big and this expensive. For our money, we’d settle for four less screen inches and grab the superior Alienware 34 QD-OLED instead.

But it’s by no means a subpar monitor. The Alienware 38 is perfectly useable for gaming across all walks of life, though competitive players might look for monitors with even lower input lag. Watch for price fluctuations as it ages. Also, if you’re in the market for a large-screen gaming monitor and want a crisper display, you might be better served by the Samsung Odyssey G9 (with its wider design, suited for flight sims and racing games) or even the LG C2 48-Inch Evo OLED TV, the latter a great, gamer-friendly crossover pick.

The pricey Alienware 38 Curved Gaming Monitor has lightning-quick response times and looks good on your desk, but it’s actually outclassed by its smaller QD-OLED sibling.

Sign up for Lab Report to get the latest reviews and top product advice delivered right to your inbox.

This newsletter may contain advertising, deals, or affiliate links. Subscribing to a newsletter indicates your consent to our Terms of Use and Privacy Policy. You may unsubscribe from the newsletters at any time.