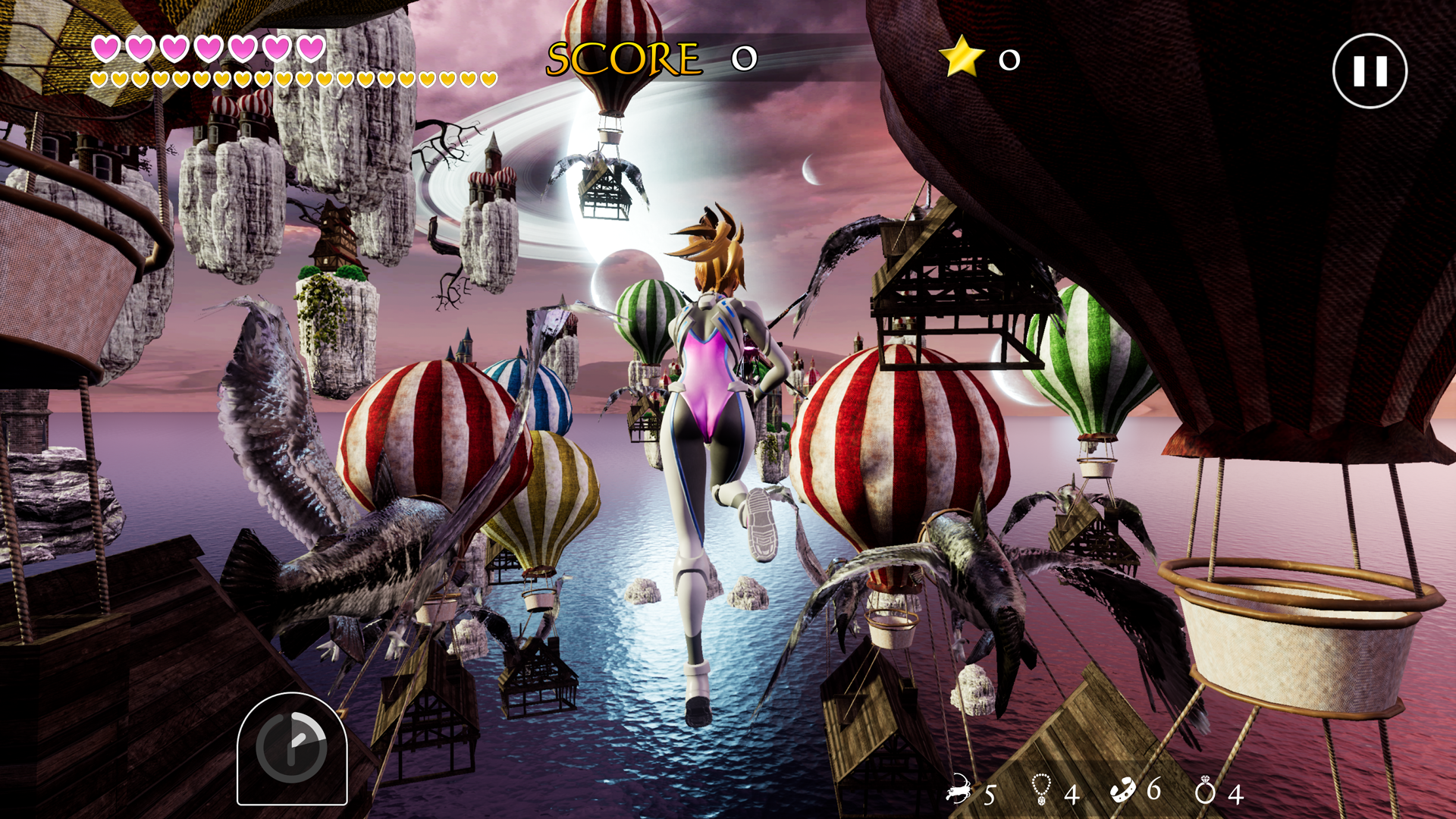 The master of the 80s arcade spectacular returns to familiar stomping ground for a game that’s fascinating if not exactly finessed.

It took what felt like several eternities for Yu Suzuki to release his last dream project, the teases and trials that led up to the eventual release of Shenmue 3 spanning over a decade. It’s wild, then, that his next dream project – a return to his 80s arcades roots, and an explicitly styled spiritual successor to none other than Space Harrier – was revealed and released within the space of a month; wilder still, Air Twister’s every bit as much a Suzuki joint as the epic Shenmue 3, and it’s a small shame its arrival has met with a muted response because this is clearly the work of a master.

Actually, scratch that, it’s the work of the master – forgive the breathless enthusiasm, but how else to meet a rare new game from the pioneer behind Out Run, After Burner and Virtua Fighter – and it’s thrilling to see Suzuki to the kind of basic yet bombastic action that made his name in the arcades. It’s an ’80s revival that to my arcade-obsessed mind is every bit as exciting as Top Gun Maverick, though this is clearly a much more modest project.

Air Twister is an on-rails shooter that shares the simplicity of Space Harrier, while at the same time folding in some of the features introduced by the many games inspired by Suzuki’s 1985 original. This is a tap shooter, quintessentially, with a lock-on you can paint by touch that feels akin to Panzer Dragoon, while elsewhere the pace of movement has been slowed from the whip-quick Space Harrier to something a bit more sedate to give space to the new control scheme.

It is, all told, a bit of a muddle, with movement also controlled by tapping and holding on a single point, meaning things can get quite confused at first (you can play on a pad but sadly it does little to unpick the tangle) . This isn’t a precision shooter, though, and after a short while it becomes clear it’s more about locking into Air Twister’s rhythm – it’s a little like Rez that way, inviting a dance of fingers that describe the incoming waves, making you feel a little like a conductor of the overblown rock opera that is Air Twister’s action.

It’s that style that really sticks out in Air Twister, developer Ys Net borrowing the surreal fantasy landscape of Space Harrier (and a handful of evocative sound effects, complete with the scratchy call of ‘Get Ready!’ that precedes each stage) and making it all that little bit grander still. Air Twister’s soundtrack does a lot of heavy lifting here, with eccentric Dutch prog-rocker Valensia providing a simply outrageous score that helps the action soar with all the pristine pomposity of a Queen classic.

That soundtrack, that style and that Suzuki swagger make sessions with Air Twister heart-lifting pleasures, though this is certainly more of a curio than a classic. This is an Apple Arcade exclusive, and while the service has provided some absolute bangers there’s often the vestiges of less salubrious mobile experiences in progression systems and unlocks. Air Twister isn’t blighted by microtransactions, but it does suffer from some of the same gating of mobile games – you earn stars during each playthrough which can then be used to unlock extra health or charms that offer buffs and defensive abilities.

That’s all well and good, but Air Twister’s simplistic action doesn’t feel like it can sustain the weight that’s been placed on it here. The protracted progression system does excuse returning to Air Twister regularly though, and I’ve still not got over the electric excitement of having an all-new Yu Suzuki action game in my pocket ready to play on a whim.

It’s irresistibly 80s Sega – or to put it another way, it’s full of the vibrancy and color that marked out the best of its arcade output, and it really doesn’t muck about. Air Twister’s quick to the core appeal – as every good arcade game should be – and it delivers a sensation that’s immediately recognizable from the likes of Space Harrier and After Burner. Of course it’s not quite as sensational as playing one of those classics on an all-encompassing taikan cabinet, but Air Twister’s overstated, operatic nature helps make up for all that. It’s not exactly a masterpiece, but there’s enough of the old magic shining through to make this more than worthwhile.