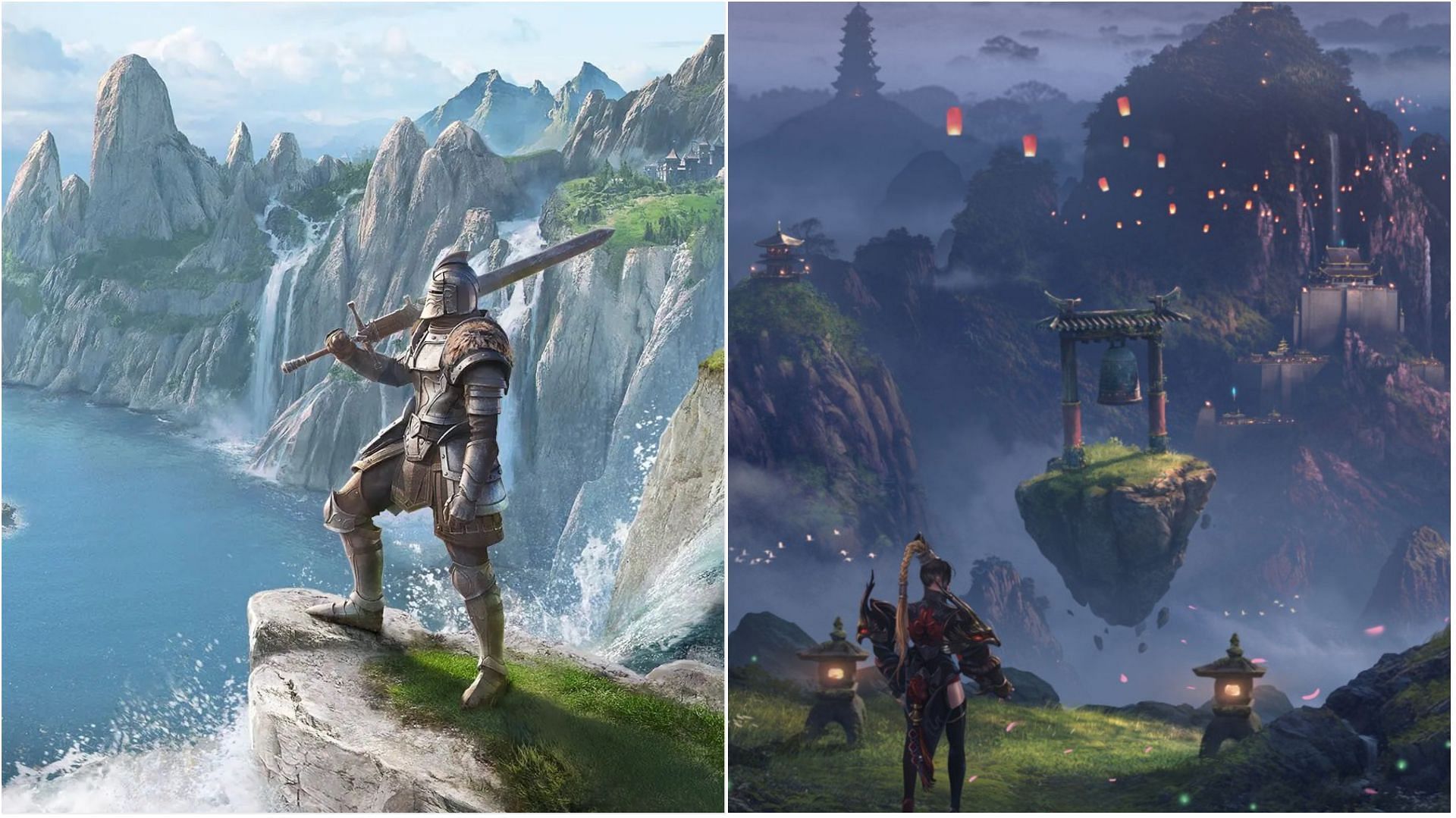 Massive Multiplayer Online or MMO games have been a great way to spend some social time in a simulated game world since Neverwinter Nights launched in 1991. This title showcased how a game world could be connected via internet servers and be a platform where people could play and hang out together.

Since then, MMO games have become quite the rage, with many becoming some of the most commercially successful in history. Many also tend to include role-playing elements, as the vast open world is the largest appeal.

These worlds tend to be very expansive to accommodate the sheer amount of players that require content to enjoy.

However, not all MMO games have a large map for users to traverse, as sometimes, for various reasons, they fall short of the large-scale expectations of users.

After the overwhelming success of Skyrim, Bethesda released their next project set in the fictional world of Nirn, titled Elder Scrolls Online. It was an MMORPG, initially placed in a handful of playable zones from nations across Tamriel.

Depending on the race selected during character creation, it was determined which nation gamers would start in, although all areas were accessible after the tutorial.

Since the title is set across multiple playable sub-regions instead of just one open map, determining the size becomes a difficult task. However, it does feature the most locations seen in an Elder Scrolls game, even taking players to previously unseen regions such as Elsweyr, the Summerset Isles, and most recently, the Systres Archipelago.

This title initially told the story of a Daedric Prince invasion, which players had to work with others to stop. Since then, each expansion has introduced newer story beats, such as the return of dragons, a vampire lord trying to take over the continent, etc.

The most iconic game in this genre, World of Warcraft, was first launched in the US in 2004 end, while a UK release was set in 2005. Set in the world of Azeroth, this MMO role-playing game lets users participate in various events , all the while mingling with others and even playing in co-op.

Since its launch in 2004, the title has seen many expansions, opening up the playable world through different maps. As of the time of publishing this article, the game has ten multi-zone continents and a few single-zone areas. This makes it one of the largest open worlds in a multiplayer game.

World of Warcraft combines many periodic elements, such as fantasy, steampunk, and science fiction. Playable in third- first-person perspectives, gamers can take up quests, explore the lands, and fight monsters on their own or by partying with one or more individuals online.

3) Lord of the Rings Online

Coming in as one of the largest video game maps of all time, LOTR Online has a whopping 77,700 square kilometers of virtual land for users to explore. This includes all of Arnor and Gondor and areas of Mirkwood, Rohan, and Minas Morgul, with a handful more.

Gamers can create characters from any of the four main races of the world, as well as seven classes. The main story across all the expansions takes place around the narrative of the books.

The final expansion tells of life after the downfall of Sauron, which had not been fully explored in the movies.

Star Wars: The Old Republic was borne out of the success of Star Wars: Knights of the Old Republic, although this game took an MMO approach to its gameplay. Set a long time ago in a galaxy far far away, it allowed players to create characters as part of any of the eight types of classes that featured their own story.

Choosing to play as either Republic or Empire, users can play as a Trooper, Smuggler, Jedi Knight, or Jedi Consular, with the other side offering the roles of Bounty Hunter, Imperial Agent, Sith Warrior, and Sith Inquisitor. Each class also features different types of gameplay elements and skill trees.

The title takes place across the galaxy in many different worlds gamers have to travel to; many more are optional. Each planet has a playable area that contains small story arcs/missions of its own. They can visit iconic locations such as Tatooine, Coruscant, Hoth & Alderaan.

As the largest MMO sandbox game to grace computers and consoles, Minecraft stands at the top in terms of its wide-open expanse of a world, with a ridiculously large 4 billion square km. If that is hard even to imagine, fans shouldn’t worry as even in terms of lightspeed, it would take almost six hours to travel that distance when laid end to end.

As a sandbox, Minecraft offers players a diverse number of options to play the game as. For some, it is simply a way to express their creativity, building large monuments or accurate replicas of well-known structures. For others, it’s an explorative title, venturing into the land and discovering its secrets.

In multiplayer mode, the game becomes a fun social simulator, letting users have fun at their discretion, playing games such as Pictionary, hide and seek, tag, etc. The title also offers RPG elements to explore, although these are entirely optional and do not require to be completed to enjoy its full potential.

Five MMO open worlds that left much to be desired

A Korean production by developer Pearl Abyss, Black Desert Online was initially released for Windows PC in 2015 but ported to Xbox One and PS4 in 2019. Set in a fantasy world during the conflict between two nations, the Republic of Calpheon and the Kingdom of Valencia , gamers must take part in large PvP conflicts in the form of siege events and castle battles.

This MMO title takes a third-person perspective mode, requiring manual aiming and precision to chain together combos and attacks, as well as dodging to evade attacks from enemies. Additional features include a taming and mount system, dynamic weather, and a day-night cycle.

The game’s entire open world covers about 397 square kilometers, which is still a significant size, yet only double that of the original World of Warcraft map before any expansions. However, a new expansion was just added in April 2022, with more to follow.

Created by Sigil Games Entertainment and published by Sony, Vanguard Saga of Heroes is a high-fantasy-themed MMO set in the fictional world of Telon. It contained three continents where players might find themselves in.

Playable solo or in multiplayer groups of up to 6 people, this game was released in 2007.

Unlike most MMORPGs of its time, Vanguard’s open world was not broken up into different playable areas accessed separately, instead generating the entire world all at once. Even traveling to a different continent had to be done manually, via sea or air travel in-game, instead of through a prompt and loading screen.

This required the title to be more compact than others, leading to a rough size of 290 square kilometers of the game map. While Vanguard has shut down, a resurgence via a remake or reboot in new hardware could be a great way to bring back old fans of the game.

Adding a few expansions to boot for some new content would be a huge success.

A relatively recent MMO role-playing game, New World was developed and published by Amazon Games on September 28, 2021. This new open-world title is set on a fictional island in the Atlantic Ocean known as Aeternum Island.

It tasks users with exploring the open world, going on quests, crafting and collecting items, and playing together or against other players and NPCs in a medieval setting.

Combat in this game is pretty straightforward, although it lacks an auto-targeting system, thus requiring a good aim from gamers. It offers a selection of weapons, including classic melee weapons, muskets, magical staves, and ice gauntlets.

This game’s map is about 50 square kilometers, which, while being large for an open-world offering, is relatively small compared to other large-scale MMOs, thus dwarfing it in size. As it is still new, readers should expect new expansions to increase the explorable areas further and add new campaigns.

A fantasy open-world MMORPG game, Dark and Light was developed and published by Snail Games as early access for PCs in July 2017. And it is currently still in early access, with no news regarding its release.

Structured around survival elements, players must find a way to carry out their lives in the world of Archos.

While it might feature a larger world in release, Dark and Light currently has a mere 40 square kilometers of land to play around in. This is relatively small for an MMO game and needs to be much more extensive for a full release, although if that will ever happen is still a mystery.

Despite its early access state, Dark and Light is an excellent title to try. With some outstanding gameplay elements, mystical creatures, magical combat, and an emphasis on exploration, it’s pretty good.

Players must learn to domesticate new creatures and build a home for themselves while a larger darkness looms over the planet.

Lost Ark is a fantasy online MMO action-adventure RPG game, which was initially a Korean-exclusive game for three years since its 2019 release. It was released on Steam for American and European audiences only on February 11, 2022. It then became one of the most played games on the platform within 24 hours.

Users have access to the main story, with similar gameplay to that of World of Warcraft. They can level up their characters by progressing and completing the campaign, with the highest level being 50. The title focuses mainly on the PvE element, although PvP is also an option.

While the world map is pretty big, the actual playable instances are somewhat compact, with small hub areas in some while others are explorable environments.

As such, the title might be somewhat small, although future expansions could provide larger areas to adventure around.

Q. Do you play MMO games?